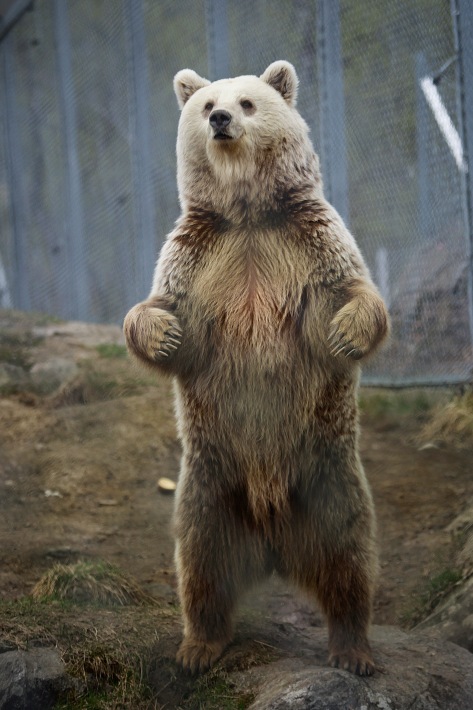 I have a friend who can’t talk about her appearance without using the word “troll.” She’s short and small. She has beautiful creamy woodsy coloring– light brown hair, pink peach skin, glittering green eyes, a graceful swoop of a nose. She is small enough that you feel protective around her. You look at the space around her scanning for potential difficulty. Can she reach that plate she’s after? Am I towering over her? If I had to compare her to a magical creature, troll would not make the list– for one thing, trolls are huge and live under bridges. I’d pick nymph. I don’t know that she’d like that, nymphs don’t have a rep as being very powerful. But if I was going to cast my friend in a movie about a magical encounter, I’d have her play the spirit of an elm the hero rests under. …

So its been roughly a week, and I’m checking up on the progress of my bookshelf project. I was very busy (*cough cough* busy procrastinating *cough cough* but I’ve at least picked up all the books that were lying on the floor or stacked on top of the shelves. So, without further ado,  here is the new and improved Library de la Mrsmarlenehawthorne…

The bottom shelf is now two rows of fantasy and historical fantasy: much better, finally! And for those of you who were wondering,  the Order of the Phoenix randomly placed in the middle is actually fake – a hollowed out version with a secret compartment for my top secret stash of Bertie Bott’s Every Flavour Beans!

Now my ‘favourite’ fiction shelf, with the very battered books as I like to think of them – JK’s finest, of course, but also Divergent, The Hunger Games, Blood Red Road, and the more obscure ones which remain firmly rooted in my heart such as the my perpetually incomplete Darren Shan books and a gem of a discount bookshop find called Dark Parties by Sara Grant.  Mostly Dystopia, the genre that has won my heart.

The classics bookshelf! Bookmarks sticking out everywhere, as you can see – I procrastinate reading classics sometimes too. I also made the difficult decision of putting The Lord of The Rings and The Chronicles of Narnia on this shelf, too, rather than fantasy or deeo fantasy. I’ve had that copy of Narnia since I was seven, which I received  along with a toy mermaid from what I can remember. Over a decade later and it still remains one of the most intelligent, insightful, captivating reads to have ever existed. Easy enough for a seven year old to read (or at least seven year old me, but then again that was the only thing I was good at as a child) but now,  nearing adulthood, I still pick up tiny clues and insights that I missed the last time I read it. If you haven’t read it yourself – why the hell not! It’s deep fantasy for people who don’t like deep fantasy and probably comes highest recommended on my list. 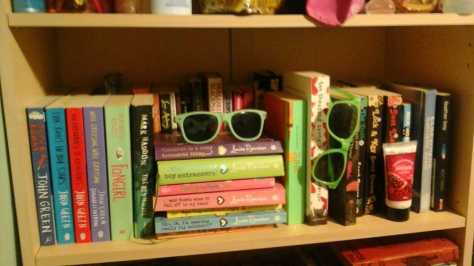 Finally the most asthetically pleasing area of the bookshelf,  my… ummm… teen reads? ‘Popular’ books? It’s a wierd mix of ‘girly’ diaries and John Green or Nick Hornby. It makes sense to me to think of it as all the fiction that is set in the real world and current ish time (although it’s really an alternative universe when you think about it, otherwise all the things in the book would have to have happened in real life, and they haven’t, so…). But I’m really quite proud of how it looks,  and hopefully when I get a bit of free time ( I don’t get free time) I’ll sort the others to look nearly as good. 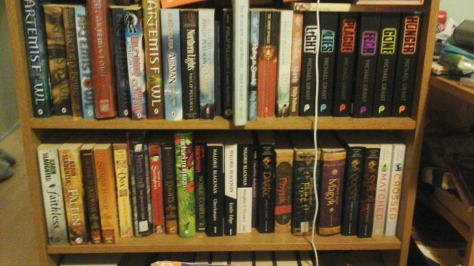 Now the top two shelves, which you first see when you enter. The series are very muddled in order, but are at least together, and there’s a vague semblance of the front stacks ( they’re double layered) being fantasy, although you can see that from the Micheal Morpurgo book, for example, that it isn’t quite. But it’s way better than it was! And by the time I sorted this out I’d been going for hours,  so with my laziness it’s impressive that the genre is together at all.

And finally, the shelf you still can’t see, hidden behind my work folders. It’s actually probably the most sorted of all the shelves there, with clear fantasy all the way through, and some amazing authors: Derek Landy, Malorie Blackman, Scott Westerfield and more. Once again, if I ever get the chance, I’ll sort it out properly into favourite to least favourite but for now, this is the total of all my updated bookshelves.

If anyone’s done the same as me, please let me know: any big projects completed over the school holidays?  For me, this was huge, as there are about 500 currently ‘living’ in my bedroom. What about you guys? Are you a hoarder or a borrower? Let me  know in the comments. Good luck! And…

I’ll be the first to say that I am no interior design expert- I don’t even live in my own house! But I am passionate about reading and my books would probably,  worryingly enough,  be one of the first things I’d save in a fire. So, based on extensive (*coughs*) research, here are 5 of my top ways to proudly present your books.

This is the most common and although not always the easiest to do, it is certainly the easiest to use once the bookshelf is complete. Looking for books by rummaging will be a thing of the past,  particularly for those of you with a logical mind. This is my goal for the holidays,  too, so comment below if you’re planning on doing the same.

This is probably the most contreversial: amazing to look at, undeniably, but for those of us who aren’t very pictorial of mind,  not the easiest to find books. Organise your LGBTQ+ fiction into a rainbow, travel guides into a flag, YA fiction into clashing colours… The possibilities are endless. I would advise this best for people who don’t use their collection too much, and have a fair amount of books to arrange.

Fancy a laugh? Feeling down? Want an easy summer beach read? Organising by genre is something you’ve probably already unconsciously done, even if it’s just fiction/nonfiction or poetry/novels. And it can be used with many other methods, like alphabetical action or colour coded cookbooks.

This is for those of you with a bit more time on your hands. Buy some thin paper, similar to tissue paper but slightly thicker (I think it might be called craft paper? If someone knows what I’m on about, comment below) and cover all your books with it. Use different colours and colour code them, or all the same fours for continuity. Now put them back. Voilà! Every time you pick up a book, in theory anyway, you won’t know what to expect.  “Don’t judge a book by its cover” in action.
For those of you who don’t fancy a craft project, much the same effect can be obtained from turning the spines to face inwards.

The list goes on. If you like visuals, organising by publisher will give you similiar spines lined up next to each other.  Try book poetry or book writing and spell phrases out with your titles on the book shelves. Order them based on emotions: the laughter level, crying corner, nostalgia nook…

Good luck with your projects and of anyone does decide to reorder their shelves, let me know! By the end of this week I should have lovely, probably alphabetical bookshelves and I will be posting an ‘after ‘ picture to accompany this ‘before’. Good luck, readers! 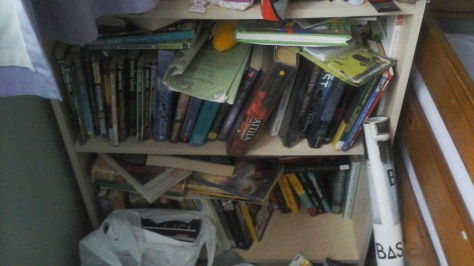 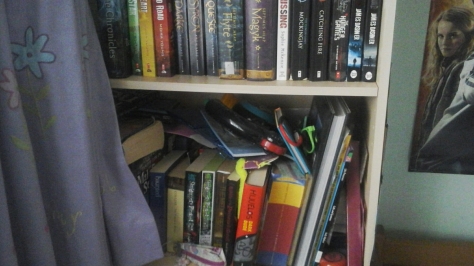 Hermione’s accusing face, she doesn’t like the mess either…

Lily Collins, guardian of the languages, non fiction (some of) and graphic novels

The main shelf, currently half hidden behind work and a complete mess 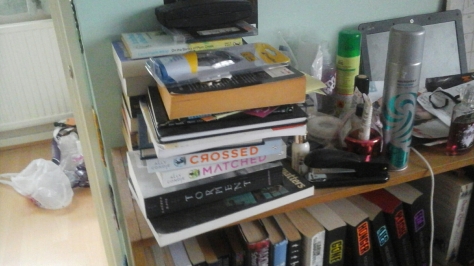 The ‘to be put away’ pile, which has been there more or less since Christmas, along with a textbook or two

I woke up this morning to 13 more followers. A lesser mortal would take that as bad luck, start avoiding black cats, etc. But as a thoroughly un – superstitious human, I’m not phased. At least that what I’ll be telling myself late at night, lying alone in bed in the dark…

I tell my kids they can think anything they want, but there are some things they’d better not say. (image via wikimedia)

I told my daughters this morning that they’d need to take a sack lunch to school tomorrow, and they laughed at me.  I wasn’t expecting them to laugh.

It took me a moment to realize why they thought sack lunch was funny.  When I was their age (around 35 years ago), sack lunch wasn’t funny.  I carried a sack lunch to school every day, and nobody laughed.  I think I even called it a sack lunch.  Everybody called it that.  But somewhere along the way, kids picked up on the word sack, and a new source of humor was created.

Now I can’t say sack in front of my daughters; I have to say “brown paper bag.”  If I had two sons, maybe it wouldn’t matter much.  But…

I laughed way too much at this. Finally someone put the thing into words.

I recently made the aquaintance if a trans boy my age. He was just like everyone else. End of story. There really isn’t such a thing as gay…

Imagine my utter delight when I learned that at the next PTA meeting, someone would be speaking about the anti-bullying laws in place to protect LGBT and gender creative kids.

Although I’m a card-carrying PTA member, I’ve attended only three PTA meetings in my six years as mother to an elementary-school-aged child. Each time I sat through the meeting feeling like the PTA wasn’t the place for me.

But, hell, if they were going to be discussing LGBT and gender issues, maybe I had been wrong.

I walked into the crowded Multipurpose Room and found a seat in the back corner by myself. I listened as the PTA board and its members ran through the agenda. When they started passionately discussing the nutritional value of whole-wheat goldfish crackers versus original goldfish crackers, I tuned out. I will never argue about goldfish crackers; of that you can be sure.

My Life As An Aspiring Software Engineer

Aternatively,
We could unplug ourselves
Off Facebook
And start writing
In journals.
Alternatively,
We could write
Each other letters
And make frequent trips
To the post office.
It will take too much of our time,
Of course, but our correspondence
Will be longer
And the pleasure of conversing
Will be drawn out.
Anyway, a conversation
Via social media
Mediated by computer monitors
And profile photos
Isn’t really much of a
Conversation, is it?
Anyway, I want to see your
Handwriting, feel the strokes
Of your pen with my fingers,
And smell the ink and paper.
You don’t have to write and sound
Like Jane Austen, although that would
Be great, as well.
You can write like a cardiologist,
I wouldn’t mind.
There are nuances in our handwriting,
You know.
Alternatively,
We could lie on roof tops
And gaze at the distant galaxies
And talk about our dreams.
Alternatively,
We could…

My house opposes the Capitol, hehe. Anyone up for a spot of revolution?

What did ya miss?